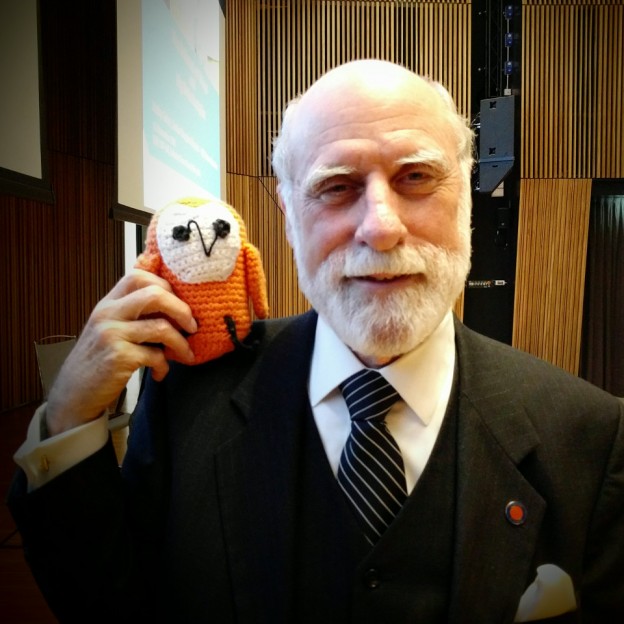 At the 2nd IEEE World Forum on Internet of Things we had the honour and privilege to hear Vint Cerf, a true role model and one of the fathers of the Internet, present a keynote on the IoT. More than that, we had the opportunity to snap the photo above as we shook his hand and thanked him for continuing to fight the good fight for the Internet (of Things). In this blog post, we’ll conclude on that comment, after we first discuss Dr. Cerf’s three pillars for the IoT and his three-pronged call to action.

The three pillars of IoT

In short, (1) the IoT will be predicated on novel security and privacy mechanisms that facilitate rather than hinder the exchange of information, (2) will use open standards (much like the Internet itself), and, (3) will be experienced through more natural, human user interfaces. The following are our comments for each point:

The three-pronged call to action

First, we feel that the term permissionless innovation beautifully articulates what will make the IoT as dynamic, inclusive and pervasive as the Internet that Dr. Cerf himself was instrumental in animating. It’s not unlike the quote by George Whitesides that we feel is a simple mantra for the IoT:

“How do we make things as simple as we can, as cheap as we can, as functional as we can and as freely interconnectable as we can? If we make that kind of simplicity in our technology and then give it to you guys, you can go off and do all kinds of fabulous things with it.”

We made a conscious decision to keep our platform as simple yet versatile as possible, and it is one of the reasons that today we have clients and partners around the world innovating in everything from retail to parking to next-generation social networking.

Second, after an extended but patient wait, we feel that the open standards necessary to spark our arena of the IoT are finally in place. Specifically, Bluetooth Smart has emerged as the first global standard for connectionless identification, and the JSON-LD & Schema.org duo has finally (in 2015) been championed by Google, where Dr. Cerf serves as VP and Chief Internet Evangelist. These open standards facilitate the interoperability of devices and structured data, respectively, and now enable us to fully pursue our own vision in 2016.

Third, we agree that identity, access control and data management is an essential new ingredient that should be baked in to the IoT early on. Perhaps we’ll soon see the emergence of The Bank of Personal Data? Without such a mechanism, how could we in fact achieve our mission to unlock the value of the data you choose to share?

Why did we thank Vint Cerf for continuing to fight the good fight? In our opinion, he is one of the few individuals applying a long-term vision to balance what’s optimal and what’s profitable for the still nascent Internet of Things, and, critically, continues to have one foot firmly planted in each academia and industry. And, from our experience, it’s an essential stance that turns out to be neither an easy position nor balance to hold!

As 2015 draws to a close, we salute all those who will fight the good fight for the Internet of Things in the New Year and beyond!

At the second IEEE World Forum on the Internet of Things in Milan, Italy, Roberto Minerva of Telecom Italia gave a keynote speech covering everything IoT from the perspective of a telecom operator. Among the topics discussed was the inevitable question of “control of data”. Who should control your personal data? How should your personal data be used? Telecom Italia surveyed Italian families concerning whether they’d accept information from within their household to be shared, and the answer, unsurprisingly, was a resounding NO!

The comprehensive presentation could be described as technically optimistic and practically pessimistic. This is characteristic of many of the European views we’ve observed, for instance that of Mikko Hypponen, which place a high emphasis on privacy and lament the amount of personal data and communications which inevitably pass through servers in the United States, subject to their surveillance apparatus. In other words, while the sharing of information in the IoT is encouraged, the existing mechanisms are strongly criticised.

Curious to explore this point further, we asked Dr. Minerva:

Do you see a means for individuals to retain control of their personal data yet share it securely and opportunistically?

His eyes seemed to brighten as he indicated that this was indeed a topic much discussed within his organisation. He explained that there’s a model not unlike that of a bank, where instead of placing money, you place your data:

You put your money in a bank, and the bank acts as a broker for you, investing your money as you see fit. But the money always belongs to you. Of course this is not always the case in Italy…

Indeed the banking model for personal data in the IoT has promise. It’s something we’ve explored at reelyActive. In February, George Koulouris collaborated with us to prototype a personal data locker which allows users to own and sell their information. However, technical feasibility alone will not be sufficient to get personal data banking off the ground.

We therefore speculate on how personal data banking may emerge. Will an entity such as Facebook, with the information of billions of individuals in its coffers, adopt such a model? Today one could argue that Facebook better resembles the Italian banking system that Dr. Minerva joked about! Will a disruptive startup create and define this next billion dollar industry? Will the individuals of the world unite and together control the means of personal data distribution?

In fact, only time will tell. But one thing is certain: unlocking the claimed $3.7 Trillion market opportunity for improving customer experiences will require the emergence of something along the lines of a personal data banking industry.